According to the World Health Organization (WHO), a healthy life is not just a life without disease. A healthy life presents a complete sense of well-being including physical, mental and social well-being.

The physical, mental and social states of a person are in continuous interaction. Therefore, a change or alteration in any of the three could cause an imbalance leading to disease.

Four main factors should be considered when talking about being healthy and free of diseases.

What is an illness?

When a part of our body is altered and cannot carry out its functions normally, we say that we are ill. An ill person will show a series of symptoms of the disease. These symptoms are subjective and only the patient perceives them. Some include feeling dizzy, tired or in pain. Signs, on the other hand are more objective and can be seen/measured by others, such as: fever, vomiting, swollen areas, sudden rises or drops of blood pressure, abnormal parameters in blood tests or electrocardiograms etc.

There are many different diseases. Some are physical diseases, others are mental and others social. We must classify diseases into different groups in order to study them. There are different criteria we could use for disease classification; however, we will focus on two: the cause or agent which provokes the disease, and by how often we suffer the illness:

Classification of illnesses due to the cause or agent that provokes them:

There are two basic types of diseases: Infectious and non-infectious.

Infectious diseases are those caused by other living organisms, which are called pathogens (or pathogenic organisms), usually micro-organisms such as bacteria or viruses. An infectious disease is passed on from one individual to another. For example AIDS, or the flu.

Classification of diseases by how often we suffer them:

Some diseases are acute, meaning that they happen in a limited time span, such as the flu. However, others are chronic, developing slowly and often lasting for the rest of someone's life, such as arthritis.

We could also talk about:

Endemic diseases being those that only affect a particular area. E.g. malaria, in tropical regions.

Epidemic: when large numbers of people suffer it in a short period of time. E.g. The flu at certain times of the year. If an epidemic spreads throughout many countries or even world-wide, it is called a pandemic (E.g. AIDS). 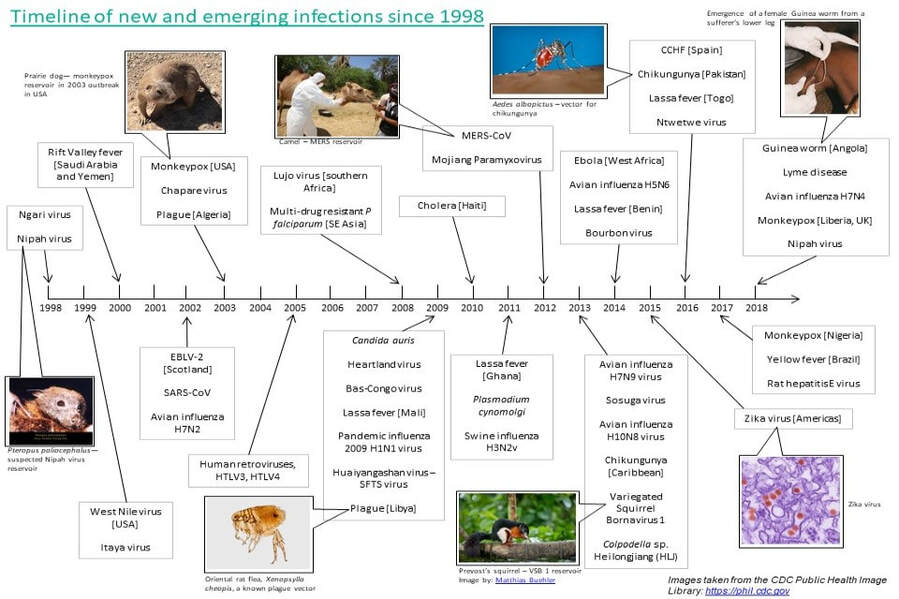 Infectious diseases (Some background of interest: Heterotrophic organisms can be: symbiotic – if they live in association with another organism; saprophytes (or saprotrophs) – if they feed on dead organic matter in decomposition; and parasites – they live on the body of a host and cause it some harm).

As mentioned above infectious diseases are caused by a living organism (pathogen), usually a micro-organism, or by a substance (a toxin) released by it. Remember, that not all bacteria are pathogenic. Bacteria are unicellular prokaryotic organisms. Most of them are saprophytes or symbiotic organisms, and only a few species are parasitic, causing diseases. There are even some bacteria which are beneficial to humans, such as those found in our digestive track, which help with the formation of faeces and the production of vitamins.

*  Some bacteria cause diseases (as most of them are saprophytes or symbiotic organisms, and only a few species are parasitic). Some diseases caused by bacteria are: pneumonia, tuberculosis, salmonella, tetanus, cholera and diphtheria.

* Some protozoans (unicellular organisms) such as PlasmodiumPlasmodium, which causes malaria, or Trypanosoma which causes  sleeping sickness.

* Fungi. Can be unicellular or multicellular organisms, and the illnesses caused by fungi are called mycosis. E.g. .Athlete's foot, candidiasis (oral or genital thrush), seborrhoeic dermatitis.

* Viruses: Diseases caused by a virus are called virosis. Viruses are not considered ‘alive’ as they are not made of cells, and they cannot survive and reproduce outside the cells of their host. A typical virus has genetic material and a protein coat, and sometimes there is a lipid layer that envelopes the protein coat. They do not have any cellular structure. All viruses are pathogens, being responsible for many of the most serious human diseases. Some important viral diseases are: the flu, measles, AIDS, and rubella.

How are infectious diseases passed on from one individual to another?


Transmission vectors, which are animals that do not have the disease but transmit it, by introducing in a healthy individual of another species the micro-organism that causes the disease. E.g. Malaria is transmitted by the mosquito Anopheles, which carries the parasite Plasmodium. Also sleeping sickness, caused by the parasite Trypanosoma, which is transmitted by the tsetse fly.