​EVOLUTION
Evolution refers to the processes, more or less gradual, that have transformed life on Earth from its earliest forms to the vast diversity that characterizes it today.  The first primitive living organisms are dated as far back as 3800 million years ago.  In fact everything in the Universe evolves, nothing stays still. We can talk about the evolution of a star, the evolution of the lithosphere… and the evolution of living organisms. It seems obvious that living beings have appeared and disappeared throughout geologic time, and that many species, nowadays with different characteristics, have common ancestors. It is known that there are species that existed in past times and are now extinct, and others which did not exist in older geologic times but that exist today. Generally speaking, evolutionary change is based on the interactions between populations of organisms and their environment.  As there have been changes in the environment, different characteristics have been needed in order to adapt to such changes. The different evolution theories study evolution, its history (that is to say the interactions among populations of organisms), and the mechanisms by which life evolves. 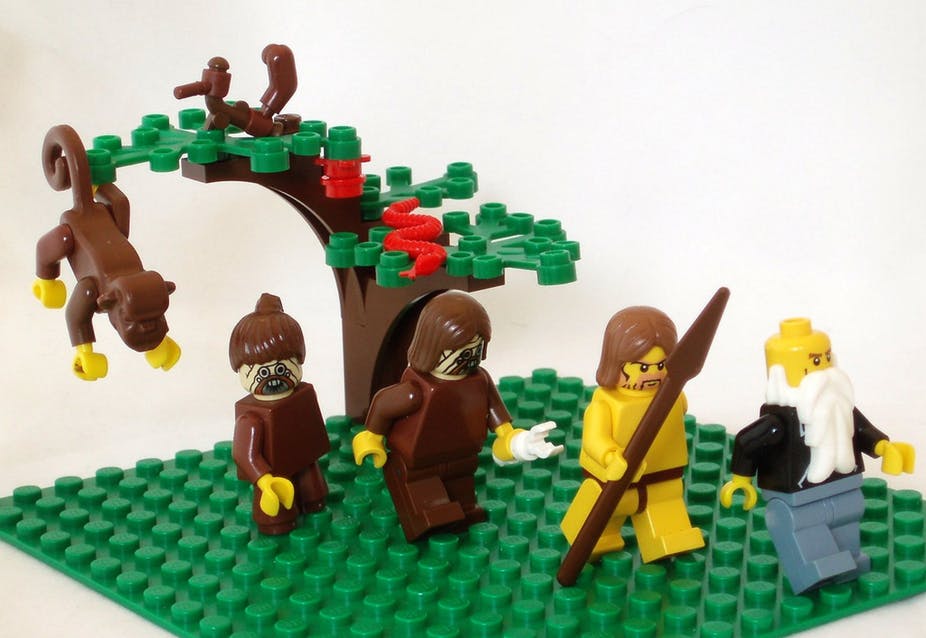 Acquired characteristics are not inherited. We all know that physical exercise will make our muscles develop, but such acquired physical characteristics (which are not genetic) are not passed down to offspring. Such acquired characteristics are produced by environmental factors and development, but not by genes. Only those characters which are regulated by genes are hereditary, and only if such genes are found in the reproductive cells. Whatever happens to somatic cells due to their use or disuse will not affect the genes in the gametes, ​Evolution of the giraffe according to Lamarck: The ancestors of the giraffe (with a short neck and short legs), also ate leaves.  As the lower leaves were eaten, it had to stretch its neck to new lengths in pursuit to eat the higher leaves. Due to that ‘innate impulse’, its neck and legs began to grow. The long neck and legs of the giraffe Lamarck reasoned, evolved gradually as the cumulative product of a great many generations of ancestors stretching higher and higher, which would be inherited by offspring.
2. Darwin’s theory of evolution
​
Charles Darwin (1809-1882) was born is the West of England (Shrewsbury), in the same year that Lamarck published his theory of Evolution. Darwin was 22 years old when he sailed from England with the Beagle in December 1831; a voyage around the world that would last five years. During the expedition Darwin collected thousands of specimens of the exotic and exceedingly diverse faunas and floras of different places. He was also able to observe the various adaptations of plants and animals that inhabited such diverse environments. After returning from his voyage, Darwin spent almost 20 years analyzing and studying all the data obtained during those five years. Another naturalist, Alfred Wallace who was working in the East Indies, sent a manuscript to Darwin in which he developed a theory of natural selection essentially identical to Darwin’s.
Together, in 1958 they published together their theory on Evolution (it should be called the Darwin-Wallace theory), which replaced Lamarck’s evolutionary theory. Darwin explained his theory in his book The Origin of Species, where he presented his theory of natural selection as  the mechanism of evolution. Basically, his theory of natural selection is based on three observations  and two conclusions from such observations:

​1st Observation: In the absence of environmental pressures (or normal conditions), all species have such great potential fertility that their population size would increase exponentially if all individuals that were born reproduced successfully.

2nd Observation: However, in normal conditions, most populations are stable in size, except for seasonal fluctuations.

1st CONCLUSION:  Therefore, not all gametes produced by an individual end up becoming zygotes; not all zygotes become adults; and not all the adults survive and reproduce. So, production of more individuals than the environment can support leads to a struggle for existence among individuals of a population, with only a fraction of offspring surviving each generation.

3rd Observation: Individuals of a population vary extensively in their characteristics. There are not two individuals exactly alike. (Think of your classmates, you each have your particular characteristics, which define you).

2nd CONCLUSION: Survival in the struggle for existence is not random, but depends in part on the hereditary constitution of the surviving individuals. Those individuals whose inherited characteristics fit them best to their environment are likely to leave more offspring than less fit individuals.
A few comments about this theory: Evolution of the giraffe according to Darwin: The variability which appeared in giraffe populations in each generation (some would stretch their neck or legs more than others) gave rise to the appearance of some individuals within the population with longer legs and a longer neck . These characters were transferred to their offspring. At first, this was not of any advantage to the individual, as there were enough low leaves on trees. However, as the lower leaves became scarse, only the individuals with the longer neck and longer legs could reach the higher leaves, which allowed them to survive through generations and have more offspring. With time it became the only type of giraffe that existed.

TODAY’S THEORY OF EVOLUTION
(The modern evolutionary synthesis or neo-Darwinism)
A comprehensive theory of evolution that became known as the modern synthesis or neo-Darwinism was forged in the earlies 1940s. This theory is not the work of one but many scientists. It is called the synthesis because it integrated discoveries and ideas from many different fields, including population genetics, paleontology, taxonomy, etc)
It brings together Charles Darwin's theory of the evolution of species by natural selection with Gregor Mendel's theory of genetics as the basis for biological inheritance. Major figures in the development of the modern synthesis include Ronald Fisher, Theodosius Dobzhansky, J.B.S. Haldane, Sewall Wright, Julian Huxley, Ernst Mayr, George Gaylord Simpson and G. Ledyard Stebbins.
We can define evolution as the natural selection (which is seen through differential reproduction), that acts upon genetic variations (which are the outcome of mutations or sexual recombination) which appear among the members of a population.
Some important aspects of this definition are:
Evolution of the giraffe according to the modern evolutionary synthesis:
The ancestors of today’s giraffes did not have a long neck nor long front legs. By mutation and/or genetic recombination new individuals presenting a long neck and/or long legs appeared in a population. Those new individuals were better adapted to the environment. They ate more, found mating partners more easily and therefore reproduced more often. With time they became the only existing giraffes. Obviously the individuals that presented the short neck and short legs (both negative characteristics), as they were less well adapted to the environment, they did not reproduce as successfully as the well-adapted giraffes. And eventually the less favorable genes disappeared from the population. 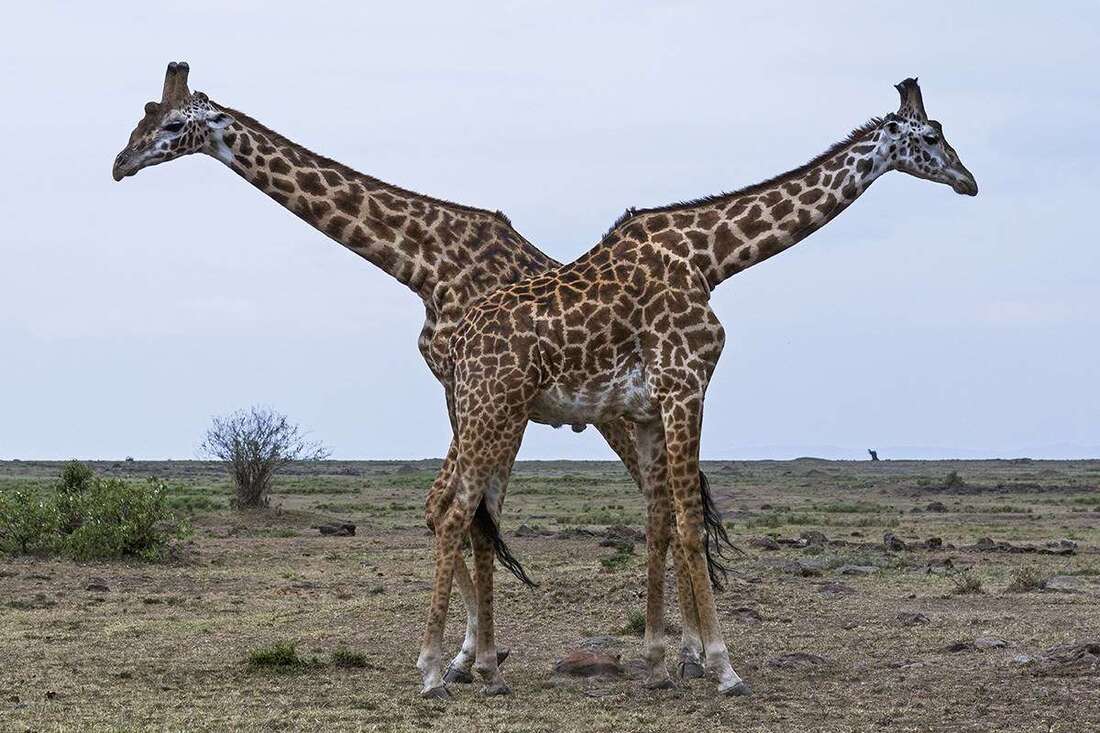