The molecular masses of substances are extremely small:

These quantities are impossible to measure in a laboratory. In order to work in the laboratories, we need to use bigger units like the gram, which is measurable on a balance. How have scientists solved the problem with the tiny molecular masses? Answer: With the unit mole (mol).

► Calculate the molecular mass of the following substances in your class notebook:


Mole as a unit of quantity of matter

We have already seen that it is impossible to work in the lab with a few molecules, because their mass is not visible. Therefore, it is necessary to use a much bigger number of molecules. Experimentally, it has been proven that an element´s molecular mass expressed in grams always contains 6,023 x 1000000000000000000000000 molecules.

This number is called Avogadro’s number.

The number of moles in a sample can be calculated using the following formula. You can use the triangle to remember the equation, but you MUST state it in full EVERYTIME you use it.

Task 4g: Complete the following calculations in your class notebook, showing all your working out.
​ 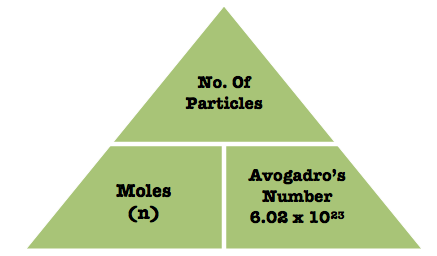 Task 4h: Complete the following calculations in your NSD, showing all your working out.