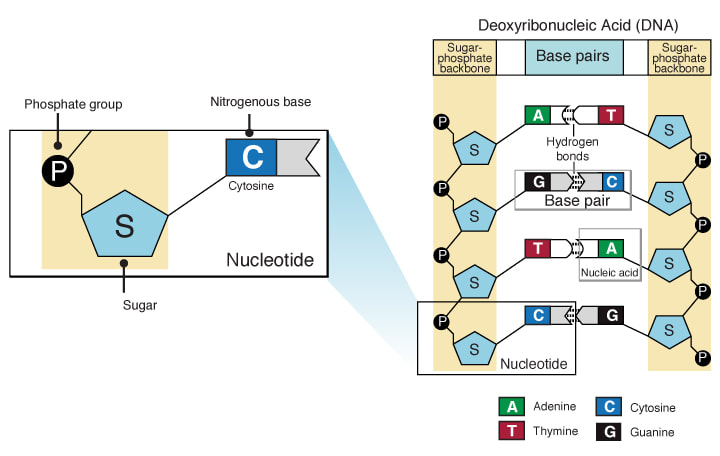 DNA
​All living things require a blueprint, a recipe book, to make various essential molecules in our body namely proteins. Like most other organisms, the blueprint for humans is found in the form of DNA which we inherit from our parents. DNA contains four molecules known as bases: adenine, thymine, guanine and cytosine (A, T, G and C respectively). Sequences of these bases make a code which can be read by cells to create a variety of proteins which then control every aspect of the life processes.

DNA is made up of molecules called nucleotides. Each nucleotide contains a phosphate group, a sugar group and a nitrogen base. The four types of nitrogen bases are adenine (A), thymine (T), guanine (G) and cytosine (C). The order of these bases is what determines DNA's instructions, or genetic code. Human DNA has around 3 billion bases, and more than 99 percent of those bases are the same in all humans.

Similar to the way the order of letters in the alphabet can be used to form a word, the order of nitrogen bases in a DNA sequence forms genes, which in the language of the cell, tells cells how to make proteins. Another type of nucleic acid, ribonucleic acid, or RNA, translates genetic information from DNA into proteins.
Nucleotides are attached together to form two long strands that spiral to create a structure called a double helix. If you think of the double helix structure as a ladder, the phosphate and sugar molecules would be the sides, while the bases would be the rungs. The bases on one strand pair with the bases on another strand: adenine pairs with thymine, and guanine pairs with cytosine.
DNA molecules are long — so long, in fact, that they can't fit into cells without the right packaging. To fit inside cells, DNA is coiled tightly to form structures we call chromosomes. Each chromosome contains a single DNA molecule. Humans have 23 pairs of chromosomes, which are found inside the cell's nucleus. 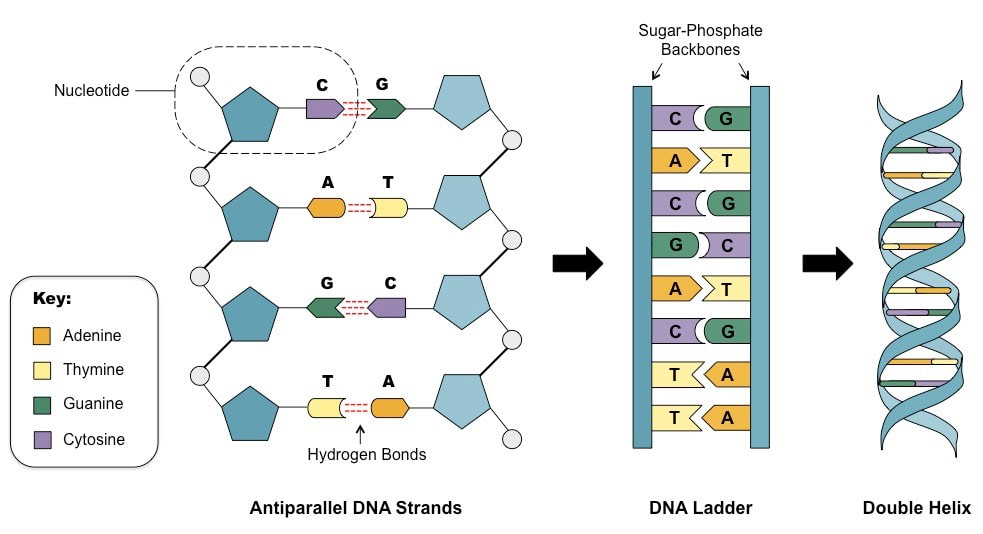 The Central Dogma of Biology

Transcription and translation
During transcription, a DNA sequence is read by an RNA polymerase, which produces a complementary, antiparallel RNA strand called a primary transcript. It would be dangerous to cut up the DNA to send instructions. so copies of a particular sequence are made with RNA which can travel outside the nucleus.. In RNA the T nucelotide is replaced with a U.
Transcription proceeds in the following general steps: 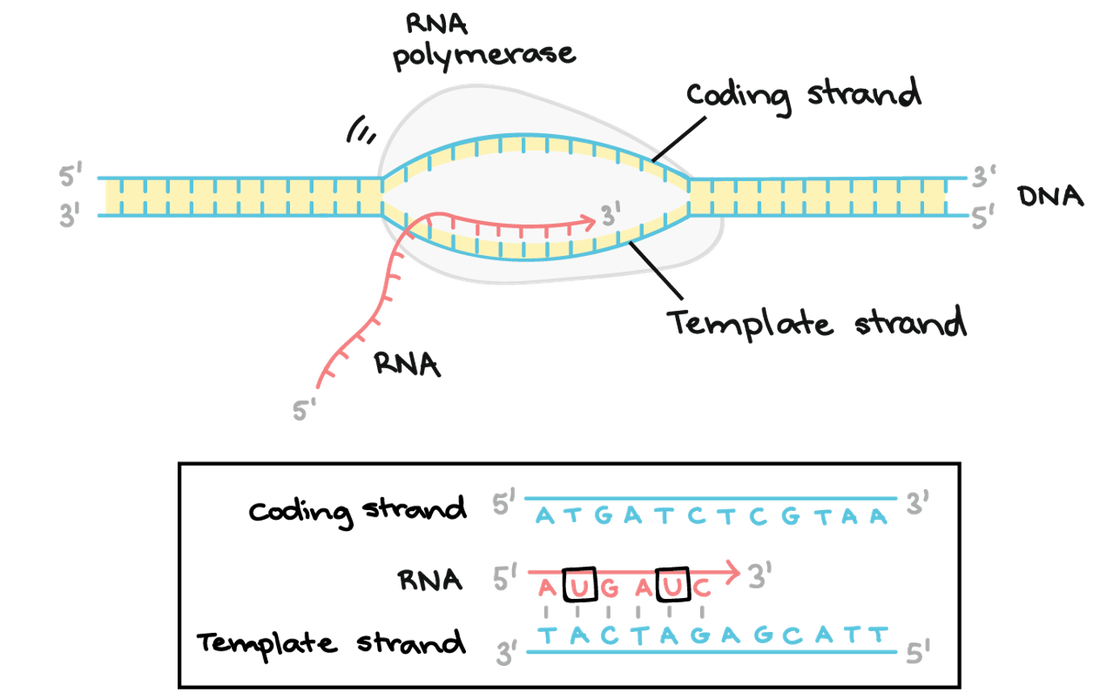 Translation
Translation is the formation of proteins by ribosome, who "translate" the mRNA code into a chain of amino acids.
​
Once in the cytoplasm the mRNA joins with the organelles known as ribosomes, which will translate the information into a protein. There will be a different protein for each gene and each protein will be responsible for a particular character of the individual e.g. green colored eyes.

Amino acids are the building blocks of proteins. The genetic code is a set of three-letter combinations of nucleotides called codons, each of which corresponds with a specific amino acid or stop signal. There are around 20 amino acids and sometimes multiple codons can code for the same amino acid.

What is a gene?

Genetic Mutations
A genetic mutation is a permanent change in the DNA  sequence. If it occurs in somatic (normal body) cells then it is not passed on to offspring. However, if a mutation occurs in the DNA of a gamete (egg or sperm) it may be passed on to offspring. Fot the most part, genetic differences between organisms come from some kind of mutation. Every unique gene began as a mutation of an existing gene.

Mutations occur naturally as accidental changes to DNA or chromosomes during the cell cycle. There are enzymes that repair and check DNA during replication but these enzymes are not always 100% effective so changed or damaged DNA can be replicated.

The rate of mutation can be increased by some environmental factors. These factors are called mutagens and include things like UV light, radiation, X rays and some chemicals..

The effect of mutations depends on where and when the mutation occurs. Because of the way DNA is translated, a change in the DNA code may affect just one amino acid in a protein or cause the entire protein to be translated incorrectly.. Most mutations have no visible effect on the organism. For mutations where there is an effect the result is usually bad. An incorrect protein works less effectively or doesn't work at all and this decreases the fitness of the organism. In very rare cases a mutation might result in a protein that works better or does something new that provides an advantage to the organism. This is what allows species to evolve and adapt to new conditions over time.
MUTATION GAMES
Play this game to understand how mutation are made

Play this game to preview some concepts coming in the next topics, and to review mutations and inheritance

What is genetic engineering?
It is a group of techniques which allow the manipulation of the genome of a  living organism.
Such genetic manipulation basically consists of the following:
a)   Insertion of new genes into a genome (transferring genes).
b)   Eliminating existing genes.
c)   Modifying the information of a particular gene.
The advances achieved in the field of molecular Genetics, (in reference to the genetic material its replication and transcription), have been the basis for a group of techniques used for manipulating and analyzing DNA used in genetic engineering and known as recombinant DNA technology.

The use of genetic engineering in research has allowed the production of valuable products by manipulating the genetic material of microorganisms such as: insulin and the growth hormone, interferons, vaccines,  enzymes  for  industrial use, etc.Additionally, manipulation  of  the  genome  of some organisms has allowed the development and production of a number  of  transgenic  organisms (animals and plants) for potential agricultural use.

​1.     Gene therapy. Genetic engineering has the potential to actually correct some genetic disorders in individuals. In the near future, many therapeutic treatments will not be providing the individual with the molecule that he/she is not able to synthesize (insulin, growth hormone etc), but rather supplement the defective gene with a functional, normal gene, so that the individual can again synthesize its own molecule.
2.  Making antibiotics. Traditionally specific strains of microorganisms were used for the production of antibiotics. With genetic engineering, the genes responsible for the production  of  the  particular  antibiotic  are  cloned  in  microorganisms.  Modified antibiotics can also be obtained.
3.     Producing mammalian proteins. Before genetic engineering a number of proteins of medical interests (insulin, growth hormone, several proteins of the immune system – such as molecules called interferons) were directly obtained from tissues. Nowadays, these are made by recombinant DNA procedures. The genes in charge of a particular protein are cloned in microorganisms for use in treating human patients E.g. Human insulin is produced in bacteria or yeast – Saccharomyces cerevisiae.
4.  Vaccines. Traditional vaccines for viral diseases are of 2 types: particles of a virulent virus that have been inactivated by a chemical or physical means, and active virus particles of an attenuated (non-pathogenic) viral strain. In both cases some risks are taken as not all the micoorganism is completely inactivated. With genetic engineering, since most antigens are proteins, the genes of interest are cloned. (An antigen is a foreign substance that triggers an immune response; some antigens include molecules of viruses, bacteria, fungi, etc). Recombinant DNA techniques can generate large amounts of a specific protein molecule from the protein coat of a particular disease- causing virus, bacterium or other microbe. This avoids the risks mentioned earlier.
5.     Production of transgenic organisms (animal and plants). It is possible to produce living organisms which genome has been artificially modified by the insertion of genes. Transgenic animals are produced by injecting foreign DNA into the nuclei of egg cells or early embryos. And transgenic plants are usually obtained by using DNA vectors to move genes from one organism to another in cell cultures.