Humans have a closed circulatory system with three basic components:

- A circulatory fluid - the blood.
- A set of tubes – the blood vessels.
- A muscular pump – the heart.
Blood: the fluid of life
Cells in all organisms live immersed in a medium which gives them all the nutrients they need. They also excrete the waste products released during metabolism into this medium.
​
In multicellular organisms like humans, this medium is called extracellular fluid. It contains interstitial fluid, a liquid found in the spaces between cells. This interstitial fluid is renewed by blood, which is constantly circulating around the body providing nutrients to cells and taking away waste products.
Composition of blood
The human body contains around 5 liters of blood. Blood is a viscous fluid which flows inside the vessels of the circulatory system. It consists of different kinds of blood cells suspended in a liquid called plasma.
There are three types of blood cell:
​ 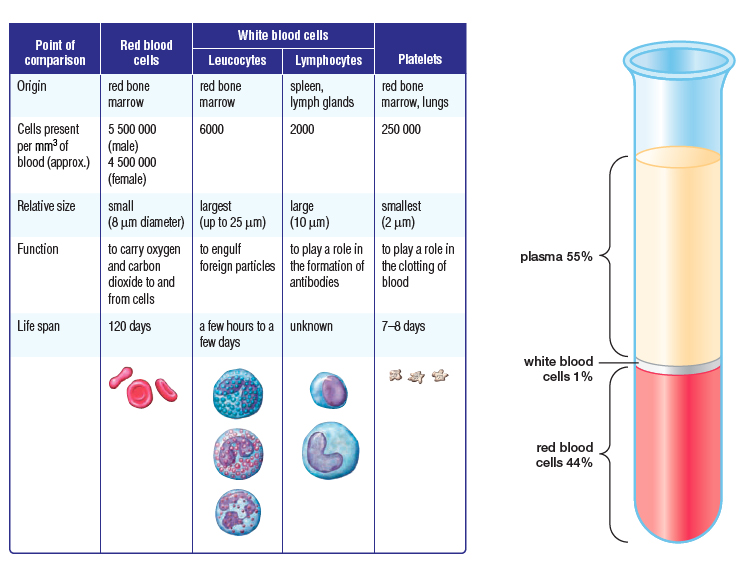 (Pixgood.com, 2015)
Functions of blood
As you have read above, blood has many different functions, others include:
Task: Create a mind-map to help you remember all the important roles blood fulfils.
Blood vessels

As already mentioned blood flows through our body in a series of body tubes called blood vessels. There are three different types of blood vessels:

Arteries: These carry blood away from the heart. This blood is under high pressure as it is being pumped along by the heart every time it beats. Arteries have thick muscular walls which contain elastic fibers that allow the artery to stretch under pressure. (Arteries divide into smaller vessels called arterioles)


Veins: Veins carry blood back to the heart. The blood returning from the body is at a much lower pressure than that being pumped from the heart. Therefore veins do not have to be as strong as arteries. Veins are wider than arteries and have much thinner walls. There are valves inside the veins which prevent blood from flowing  the wrong direction. (Capillaries come together to form thicker venules. The venules then from veins) 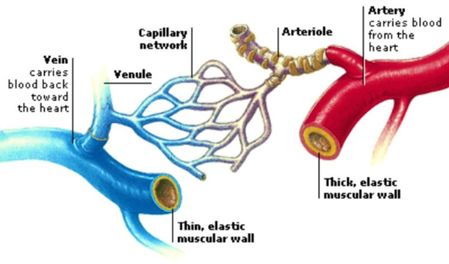 (VOGM Parents Alliance, 2015)
Task: In your NSD, insert an image taken from a microscope that shows both human veins and arteries.
Label the image with straight lines (not arrows) and underneath explain the differences. 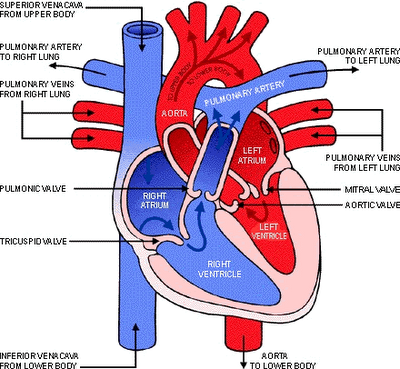 (Ceufast.com, 2015)
​Mammals have a four-chambered heart with two atria and two ventricles.

Coordinated cycles of heart contraction drive double circulation in humans (and other mammals):

Both ventricles do not contract at precisely the same time, the left ventricle contracts slightly before the right. After contraction the ventricles relax, and wait for the next electric impulse. The atria fill with blood and an impulse from the pacemaker starts the cycle over again.
Task: Imagine you are a red blood cell (RBC), and write a poem, story or rap about your journey through the heart, around the body and back to the heart. What would you see, hear, feel as you travelled through the ventricles, arteries, capillaries and veins?
Blood flow through the heart
So, this is how it goes:

A heart attack
Task: Review the circulatory system with this link and revise using the questions after the animations.
Download here your class presentation (it is also available for download in our shared folder in Google Drive)
REVISION WORKSHEET