UNIT 2 MATTER AND ITS PROPERTIES

Key concept - Systems - What systems can we use to observe and quanitfy what we see in our everyday life, and how can we communicate this information.

Related concepts - Form - How can we use scientific models to explain and predict these changes?

Global concept - Scientific and Technical Innovation - Matter is fundamental to our industrial and technological development, we need to understand its properties to utilise it to our best advantage.

Task guide
The tasks and questions on the Weebly will be coloured to represent the different style of questions that you will find in your exams. The task should be completed in your "Natural Sciences" GoogleDrive document.

Matter is the 'stuff' that things are made of - it occupies space and we can measure its properties.

We use intensive properties to help distinguish matter.

Mass is the quantity of matter in an object. The SI unit of mass is the kilogram (kg), although the gram is often used for smaller quantities and the tonne for larger quantities. Volume is the space an object occupies. The SI unit of volume is the cubic metre (m3).
Density is the relation between the mass and the volume of an object. The density of an object is the quotient of its mass per unit of volume. The Si unit of density is kg/m3. (It measures how concentrated the mass is).
​
Melting point is the temperature at which a solid, at standard pressure, completely changes into a liquid, and boiling point is the temperature at which a liquid boils and turns into a gas (or vapour), under standard pressure. The SI unit of temperature is the Kelvin (K), although the Celsius (ºC) temperature scale is often used.

Kinetic Particle Theory - Particles on the Move
The kinetic particle theory explains the properties of the different states of matter.

Everything is made of tiny particles. These particles are not free to move around in a solid, but they move freely in liquids and gases. As they randomly move they collide with each other and bounce off in all directions.
These particles can establish forces of attraction between them. Depending on how strong these forces are the state of matter is determined. There are four states of matter: solid, liquid, gas and plasma. We will study the first three.

But, how can we explain the different characteristics of solids, liquids and gases? It is the arrangement of the particles and how strong the forces of attraction between them are that makes a difference. Let’s take a closer look!
Changing states – Phase changes

How do substances go from one state to another? It is all about energy!

We use heat (= thermal energy) to melt a solid. Heat makes the particles move faster. Once the particles have enough energy, they can start to overcome those forces which hold them together. As we keep providing energy in the form of heat the particles will move faster and eventually the liquid will boil and change into a gas (vapour).
Task 2c.

Add the names of the following processes to this diagram: (You can either draw this in your notebook, or use google docs to complete it. 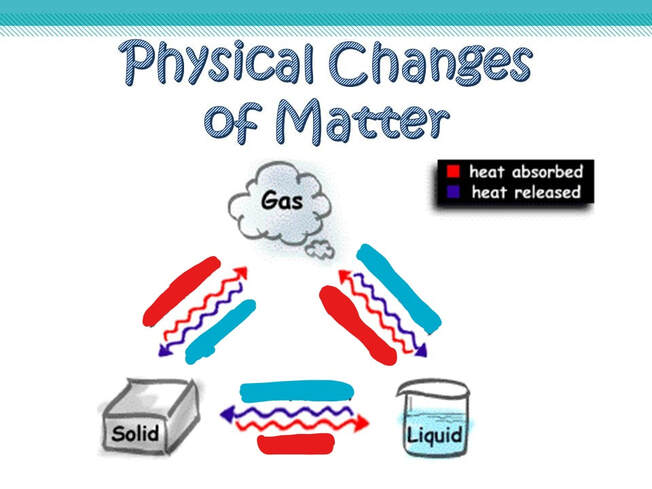 We have seen the three major states of matter, There is a fourth state of matter called a plasma - you might have it in your television. What can you find out about it? What about any other states of matter?

The vapour pressure of a liquid is the pressure exerted by the vapour when equilibrium is reached between its vapour phase and its liquid phase. 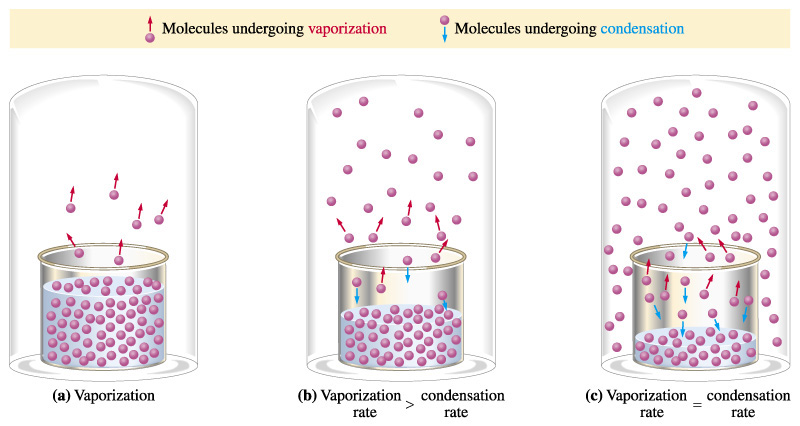 Why does this happen?
​Well, as not all particles have the same kinetic energy, in all liquids at a given temperature, some particles will move faster than others. The faster ones and near the surface have enough energy to escape and turn into a gas – evaporation – As the number of these gas particles increases, so will the vapour pressure. Eventually a point will be reached where the inverse process will take place; gas particles will lose energy and will turn back into the liquid state – condensation - , reaching an equilibrium, when evaporation rate equals condensation rate. At this point the pressure exerted by the vapour is called the vapour pressure.
Boiling point