As you may recall from previous years, living things show a series of characteristics: nutrition, interaction and reproduction. Nutrition we have studied in more detail in the previous unit, reproduction will be looked at in the next unit, and now we are going to study in more detail how organisms interact and relate to the environment.
All living organisms show irritability or sensitivity which is the ability organisms have to detect changes in their internal or external environment, and respond to them. Usually, these responses involve movement.

There are two systems working together to direct and regulate all of the different body functions: the nervous system and the endocrine system.
Coordination: The Nervous System

Coordination in humans (in all mammals) is achieved through two systems, each with its own particular role. The nervous system deals with rapid but short-lasting responses, whereas the endocrine system brings about slower, longer lasting responses. 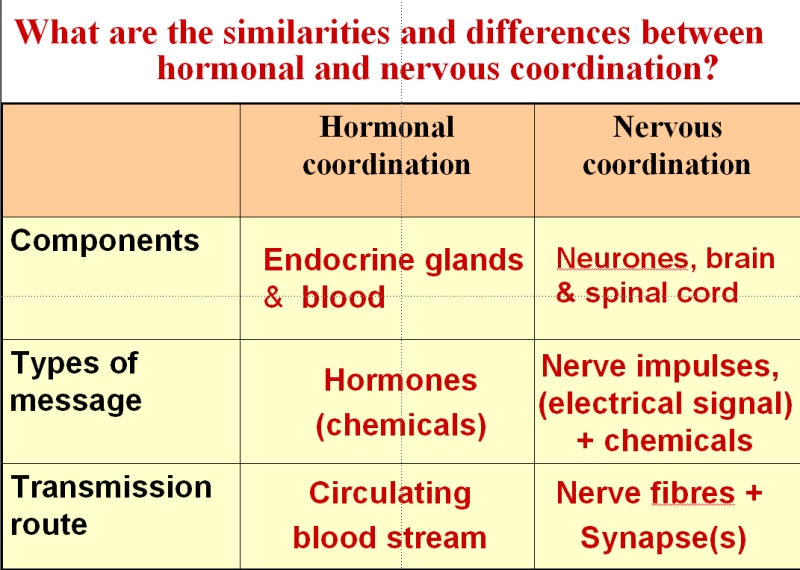 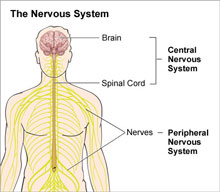 Review animation. Click here and use the menu below.

The CNS (rain and spinal cord) is the processing unit. It integrates the working of receptors and effectors to bring about the appropriate responses. It controls our voluntary and many of our involuntary actions. It also carries out other important functions as it carries out intellectual and mental processes and transmits emotions and feelings.

A receptor detects a change in conditions (stimulus). A message is carried from the receptor to the CNS (the processing unit) by a sensory neurone.  After processing, a message is sent from the CNS to an organ (an effector) that carries out a response. A motor neurone carries this message.

CNS and PNS
A brief review

Click here for some great ideas to enhance the nervous system

Neurones (or nerve cells) are the most specialised cells in humans. All the information carried by the nervous system travels along this specialised cells. The structure of a neuron and the way is adapted to its function is shown below. 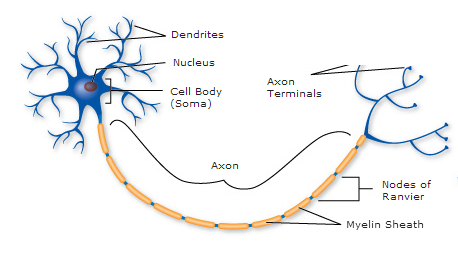 Cell body: controls the metabolism of the nerve cell.

Dendrites: The dendrites connect one neuron with the next. Here the impulse enters the cell.

Axon: The axon is a long fiber with small branches at the end which carries information away from the cell body (so where the information leaves the cell).

Messages pass along neurones in the form of electrical impulses. These impulses travel very quickly from one end of a nerve cell to the other. Between the end of an endplate of one neuron and the start of a dendrite of the next there is a gap called the synapse. An impulse arrives at the synapse. At the end of the axon (or endplate) there are tiny sacs containing a chemical (neurotransmitter) which is released into the gap. The chemical diffuses across the gap passing the information of one neurone to the other.
(Example of a neurotransmitter: endorphin)

The spinal cord, which runs down the neck and back inside the vertebral column receives information from the skin and muscles and sends out motor commands for movements.
It has two functions:
Below is an example of how a reflex action works.