INTRODUCTION VIDEO
All living organisms reproduce. Reproduction is the process by which organisms generate new individuals of the same kind ensuring continuation of the species.

There are two types of reproduction: asexual and sexual. Humans have sexual reproduction.

The process involves a number of stages. The parents have sex organs which produce sex cells or gametes.  The male gamete is sperm and the female gamete is the egg.
Sexual reproduction is the fusion or fertilisation of the two male and female gametes to produce a fertilised egg or zygote. The fertilised egg goes on to divide many times to form a ball of cells. This grows into an embryo which eventually develops into a separate individual.

In humans, the organs involved in the production of the sex cells are called the gonads, the testicles in males, and the ovaries in females. Gonads also produce sex hormones. 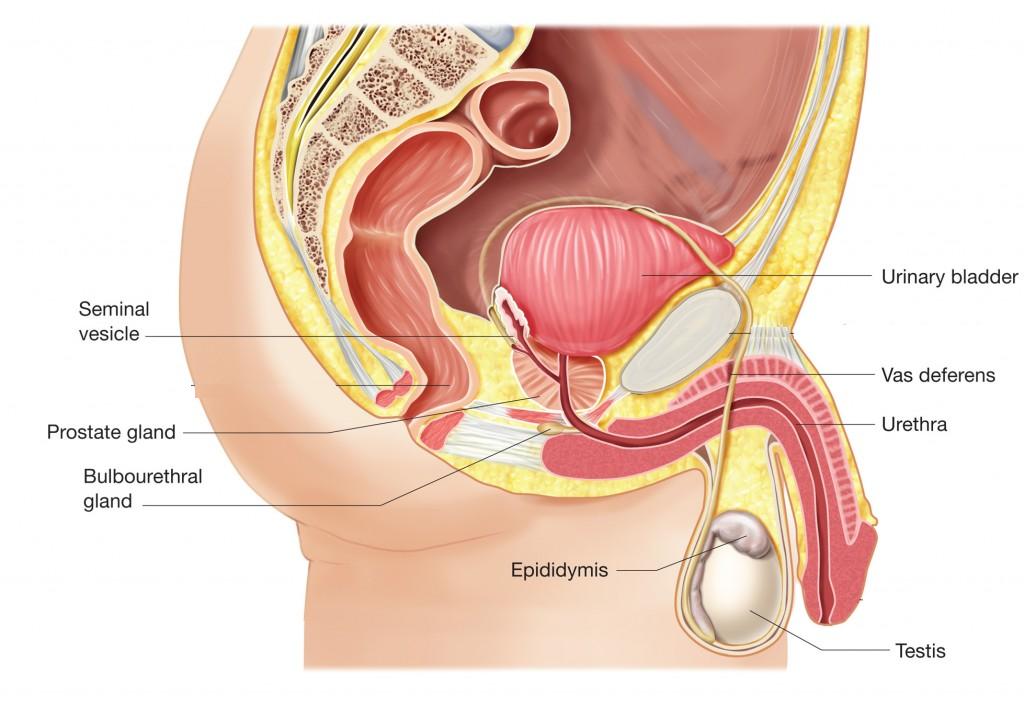 The male reproductive system has two functions:
Testicles (or testes)
Male gonads are called testicles. These two organs are composed of numerous coiled tubes (seminiferous tubules) where we find the cells that produce the spermatocytes (precursors of sperm cells). Additionally, it is in the testicles where the male hormone, testosterone, is produced and released in the bloodstream.

The testes are enclosed in a sac of skin called the scrotum, which hangs outside the body between the legs. This keeps them at a temperature 2-3 ºC lower than body temperature, best for development of the sperm.

The sperm is transported and stored in a series of tubes until it is released from the tip of the penis. These tubes are known as the reproductive ducts:

There are as well a number of glands that secrete substances that mix with the sperm to produce a fluid called semen.


Penis
This is the male organ that deposits semen (containing sperm) inside a woman’s body during sexual intercourse. It contains two spongy masses of erectile tissue (the corpora cavernosa) on each side above the urethra.

In addition to producing female gametes, the female reproductive system receives male gametes. It provides a site for fertilization and for the development of the zygote. 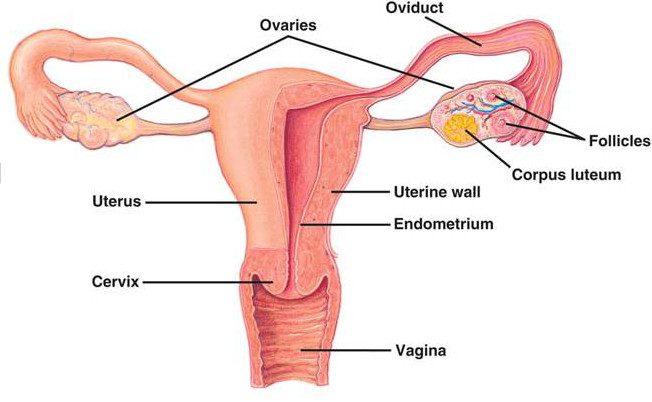 The reproductive ducts in females play a role in fertilisation and gestation:

Fallopian tubes (oviduct): Carries the ovum to the uterus. Fertilisation occurs in the first third of the fallopian tube.

Uterus (womb): This is where the fetus develops; gestation. During pregnancy the uterus increases its size from 10 cm3 to 5 dm3. The wall of the uterus has a thick muscular layer (myometrium) lined with a mucus membrane (endometrium). The uterus narrows at its bottom, the cervix (also known as the neck of the uterus, where it is connected to the vagina.

Vagina or birth canal: This is an elastic, muscular canal with a soft, flexible lining that provides lubrication and sensation. The vagina receives the penis during intercourse, and also serves as a conduit for menstrual flow from the uterus. During childbirth, the vagina is the ‘way out’ for the baby.

Vulva: This is the external female sex organ, made of two lip-like folds of skin on each side of the vaginal opening: First the labia minora and then the labia majora. In between them is the clitoris, a sensitive organ with erectile tissue similar to that of the penis.
Some animations
The pill and the menstrual cycle
References
Anon, (2015). [online] Available at: http://4.bp.blogspot.com/- [Accessed 10 May 2015].
​
Anon, (2015). [online] Available at:
http://U1eDEukP0fA/VJkkldS8tjI/AAAAAAAAAV8/4swpyYXpoV8/s1600/menstrual%2Bcycl e%2Bchart%2B-%2B3.jpeg [Accessed 10 May 2015].
​
Artificialinsemination.files.wordpress.com, (2015). [online] Available at:
https://artificialinsemination.files.wordpress.com/2011/04/ovary-schematic.jpg [Accessed 10 May 2015].