Plants or metaphytes are, autotrophic multicellular eukaryotes, with tissues.

​
Besides these main characteristics, plants all have similar physical features that make them easily recognizable.

They are non-motile. They are rooted to the ground. However, they do move when they open their flowers, fruits

Plants are classified into 4 groups: bryophytes or mosses, pteridophytes or ferns, gymnosperms and angiosperms. 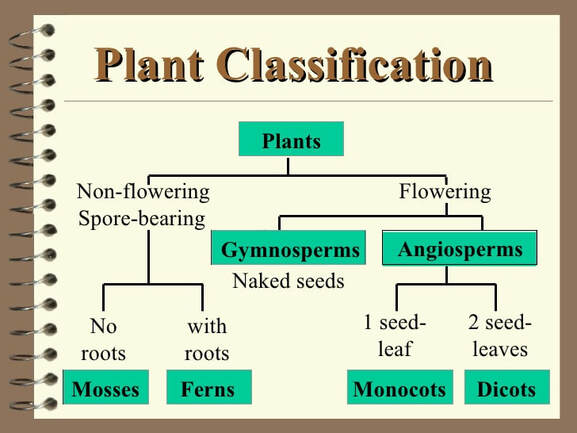 Gymnosperms or conifers are plants with vascular tissues but without fruits.

They are trees or shrubs, mostly evergreen and they grow in different climates. However most of the species are found in colder climates and at higher altitudes than other trees. The features of a conifer are the following:

Conifers reproduce sexually. The male cones of conifers produce pollen. The pollen is distributed by wind reaching the female cones. Once fertilization takes place, the female cone develops into a pine cone. The fertilized pine (female) cones grow seeds (pine seeds) which will eventually give rise to new plants.

Angiosperms or flowering plants have vascular tissues, flowers and fruits.

Angiosperms are the most successful of plants. We can find an enormous variety of them, and they are the largest group. They have evolved into many species and adapted to all habitats


Flowering plants also reproduce sexually. The pollen is transported by insects or distributed by the wind from flower to flower. After a flower is fertilized, the fruit is formed in which the seeds are enclosed.
3.  More About Plants


Roots: Subterranean organs. They anchor the plant, absorb water, mineral salts and other nutrients from the soil. They are also a reservoir for food.

The stem: Aerial organ. It keeps the plant upright, and the different organs together. It also transports substances throughout the plant.

Stems (shoots) can be herbaceous, if they are soft, or woody if they are hard. (The stem divides into branches where we can see nodes; small bumps from which other branches, leaves, flowers or fruits can develop. The space between nodes is known as internode. At the nodes and apix of the stems there are buds. From buds new leaves and branches are formed). 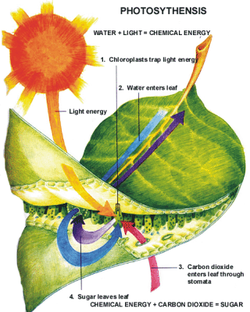 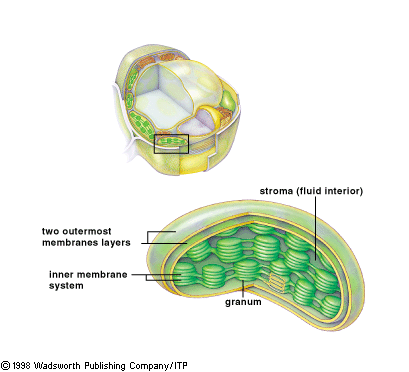 ​The simple sugars manufactured during photosynthesis will be used by the cells to make other substances.
3.4  Respiration in plants

Plants, just like any other living organism, also respire. During respiration, the gas exchange is exactly the opposite as in photosynthesis. Oxygen is taken in and carbon dioxide is expelled as a waste product. Plants always respire.

Plants carry out photosynthesis and respiration during day time, and only respiration at night time.
​
​3.5  How plants interact and respond to their environment

Plants, like all living things, are sensitive to their environment. Since plants are non-motile, they respond to different stimuli by changing their growth patterns.
A positive response is when the plant moves towards the stimulus. And a negative response is when the plant moves away from the stimulus. Some of the responses to stimuli are temporary movements while others are definite changes.
Tropisms are permanent changes in a plant’s growth: ex. when a plant grows towards or away from light it is phototropism. A positive geotropism is when the root tries to find soil.
Nastics are temporary changes that have nothing to do with their growth; such as plants that follow the sun, or open (up) during the day and close at night.
Click here to play a respiration game and here to check your knowledge.
​4.  Plants Reproduction
Plants can reproduce asexually or sexually.

Fertilization is the step that follows pollination. Once the grain of pollen has landed on the stigma of a flower, pollination is complete.
Now that the pollen grain is in the stigma of the flower, it grows a pollen tube that goes down the style. Eventually, the pollen tube will reach the ovary.
Once inside the ovary, the pollen tube opens up allowing the male sex cells move down and into the ovary where it will fuse with the female sex cell forming a zygote.
The zygote will turn into an embryo, which will be enclosed in a seed..

​
4.4 The formation of seed and fruit

After fertilization takes place, the flower undergoes a few changes.

When the fruit is ripe, it falls to the ground eventually releasing the seeds. Shortly after that, if the environmental conditions are good, the seed will germinate.
The seed needs the following to germinate: a water supply, oxygen and a suitable temperature.
During germination, the seed absorbs lots of water swelling up until bursting (splitting open) of the outer coat. Once the outer coat splits open the new plant begins to grow.