Our understanding of inheritance began with the work of Gregor Mendel. Mendel was a monk but in his spare time he bred plants, crossing different varieties together and taking careful records of the characteristics of all the offspring..  Prior to Mendel, most people believed inheritance was due to a blending of parental ‘essences’, much like how mixing blue and yellow paint will produce a green color.  Mendel instead believed that heredity is the result of discrete units that don't blend, which we now call a gene.
Please note that we use RATIOS instead of PERCENTAGES and we add the phenotypes in the squares too.

Mendel’s conclusion
From all his experiments on pea plants, Mendel reached these three important conclusions about heredity in plants:
1. Characteristics in plants are determined by “hereditary units”.
2. Hereditary units are passed on from both parents, one unit from each parent.
3. Hereditary units can be dominant or recessive — if an individual has both the dominant and the recessive unit for a characteristic, the dominant characteristic will be expressed.
​
We now know that the “hereditary units” are of course genes. But in Mendel’s time nobody knew anything about genes or DNA, and so the significance of his work was not to be realised until after his death.

GENE: A sequence of nucleotides to which a specific function can be assigned. Each gene occupies a specific position on a chromosome called its locus (loci –plural). Genes are passed down from parents to offspring (via the gametes) during sexual reproduction.

ALLELE: An allele is an alternative form of a gene. They are found in the same locus in each homologous chromosome and carry information for the same character, e.g. the gene that determines shape of hair follicles can have two alleles, one that produces straight hair and one which produces curly hair. A gene can have multiple alleles.

GENOTYPE: It is the genetic information of a particular organism as specified by its alleles. The genotype is hereditary, as parents pass it down to their offspring, The genotype is represented by the letters of the alleles e.g. AaBb

HOMOZYGOUS (TRUE-BREED): An organism which has a pair of identical alleles for a certain character is said to be homozygous for that character. Normally genes are represented by letters, so a homozygous organism will have the same letters (AA, aa, BB, etc)

PHENOTYPE: It is the observable characteristics of an organism produced by the interaction of its genes and the environment which surrounds its development. E.g. Black hair, blue eyes, etc.

CODOMINACE: Neither allele is dominant or recessive. Instead both alleles are separately (equally) manifested in the phenotype. E.g. human blood type group AB.

INCOMPLETE DOMINANCE: It is characterized by an intermediate phenotype. For example having pink flowers with white spots.

The phenotype of an individual is determined by his or her genotype. The genotype is determined by alleles that are received from the individual’s parents.. These alleles control if a trait is dominant or recessive. Remember, traits are dominant if only one copy of the allele is required for expression of the trait.
You can determine the likelihood of producing a child with a particular trait using a Punnett square. Assuming you know the genotypes for the trait, using a Punnett square allows you to visualize the potential genotypes of their offspring as well as determine the probability of a phenotype being expressed. .

For example. If you wanted to know what happens if two heterozygous pink plants are bred together you would organise the information as in the diagram below. 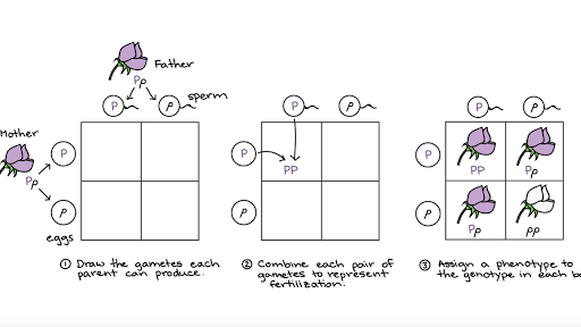 Sex linked inheritance
For some extra help click on this link
Download the worksheet here
Go through this animation to understand it better
Haemophilia
In humans, the alleles for certain conditions (including some forms of color blindness, hemophilia, and muscular dystrophy) are X-linked. These diseases are much more common in men than they are in women due to their X-linked inheritance pattern. ​Let's look at a Punnett square example using an X-linked human disorder: hemophilia, a recessive condition in which a person's blood does not clot properly. A person with hemophilia may have severe, even life-threatening, bleeding from just a small cut. Hemophilia is caused by a mutation in either of two genes, both of which are located on the X chromosome. Both genes encode proteins that help blood clot. Let's focus on just one of these genes, calling the functional allele XH and the disease allele Xh.
In our example, a woman who is heterozygous for normal and hemophilia alleles (XHXh) has children with a man who is hemizygous for the normal form (XHY). Both parents have normal blood clotting, but the mother is a carrier. What is the chance of their sons and daughters having hemophilia?

Since the mother is a carrier, she will pass on the hemophilia allele (Xh) on to half of her children, both boys and girls.

Go through this genetics lab to practice Sex-Linked traits 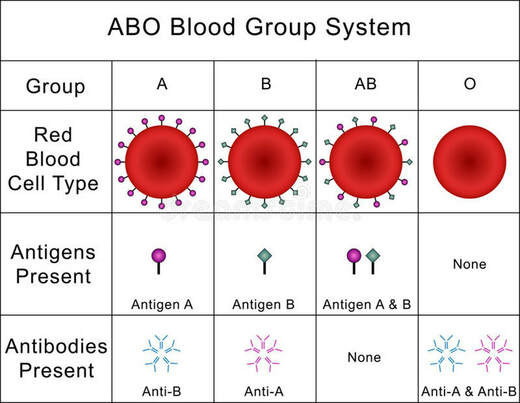 By the time you are six months old, you naturally develop antibodies against the antigens your red blood cells lack. For instance, a person with A blood type will have anti-B antibodies, and a person with B blood type will have anti-A antibodies.  If you have type A blood, you cannot receive B blood because your body's anti-B antibodies will fight the B blood's B antigens.
Donating Blood
When a patient receives a blood transfusion it is vital that the blood  is compatible with his own, if it is incompatible, donor antigens react with antibodies in the patients plasma..
An immune response known as agglutination can occur.
Agglutination is the clumping together of red blood cells due to interaction between antigens and antibodies.. This causes the blood to start clotting inside the body, blocking blood vessels and can lead to death.
In practice, incompatible antibodies in a transfusion can be diluted by the recipient’s plasma, so this is not always fatal. 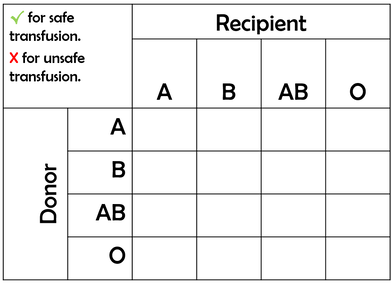 Task
1. Complete the table above to show which transfusions would be safe (no agglutination) and which would be unsafe (agglutination).

​3. i) Which blood type is a universal recipient?
ii) Explain why people with this group can receive any type of blood.

4. i) Which blood type is a universal donor?
ii) explain why this group can be given to any recipient.