Problem:
How did he use information from atomic spectra?
As these lines are only found at specific frequencies, it seems logical that they are produced by jumps or drops between specific energy levels. Therefore, not all energies are allowed.

This process can be used to determine the composition of stars that are many light years away as each element has a unique emission and absorption spectrum.

4.1e - Atomic orbital theory
Task 4a:
1. State the 3 postulates (conclusions) of Bohr´s model.
2. Describe the results of Rutherford´s model.
3. What is the "plum pudding" model?

4. What was the major difference between Dalton´s proposal and Thomson´s plum pudding model?
5. Why did Rutherford propose that the nucleus was very small?
6. What would be the main difference in atomic spectra given by a very small atom or a very large one?

7. How does Bohr´s model support the existence of atomic emission and absorption spectra?
8. Explain 2 problems with Rutherford´s model.
9. If Rutherford had carried out his experiment and found that all radioactive alpha particles were reflected, what might he have concluded?
10. If all atomic spectra had only 1 line at the same frequency of light, then what could Bohr have proposed about the structure of the atom?﻿

In 1924, Louis de Broglie suggested that electrons can actually behave like particles and waves - "wave-particle duality".
Helpful animation website
Exension reading: One of the problems with Bohr´s atomic model was that the classical model of physics stated that the electron would be pulled into the nucleus. Read the article below to explain why the uncertainty priniple is important in solving this problem..
​
Read the following Guardian article (Jha, 2013).
​
Task 4b:
1. For each of the "shells" (energy levels) that you have seen before, there are a particular number of orbitals (above) that are possible. Find a 3d diagram for the shapes of:2. The first energy level (shell) contains just one s-orbital. Find out which types of orbital are found in the second and third energy level.

Using Heisenburg´s uncertainty principle, we find that in each energy level (as demonstrated by lines on atomic spectra) can be sub-divided into a number of atomic orbitals. The orbitals in each level are explained below left and the energies of these orbitals is shown below right. (Chemguide.co.uk, 2015)
If we know the number of electrons in an atom or ion then we can work out which energy level and orbitals that they are in by following 3 simple rules:
​
The Aufbau Principle - We must always fill up from the lowest energy orbitals first with 2 electrons in each.
The Pauli Exclusion Principle - 2 electrons in the same orbital must be drawn with opposite spins.
Hund´s Rule - For orbitals with an equal energy we must place one electron in each before adding a second electron.
​
Animation on electrons filling in orbitals following aufbau rules. Click here.
Download the document below to see examples of electron configurations and how they are written.
Task 4c: a. Complete the electron configurations for these atoms and ions:
This PowerPoint below may be useful in guiding you through the process: 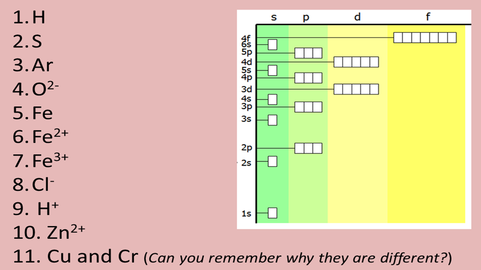 We can state the electron configuration as:
[Ar] 4s2
​
Extension: Explain when we might find electrons in the g, h and i orbitals and explain why this would be difficult to do. This article may help you - "Are g-orbitals possible?"

Each electron can be individually identified by a set of 4 numbers describing exactly where it is found. These are called quantum numbers.

n = Describes the main energy level in which the electron is found. Remember: We can tell which energy level by looking at the large number in the electron configuration e.g. An electron in a 4d-orbital is in the 4th energy level --> n = 4
Extension: ​
a. How many sets of quantum numbers could be associated with an electron in a 3p orbital?
b. Which properties of an element are affected by the "spin" of electrons? Why is it useful to know if we have paired and unpaired electrons in an atom? (https://www.youtube.com/watch?v=Isd9IEnR4bw#t=265)
Task 4g:

4.4 Atoms and the periodic table

Ionic bonding occurs if...
2 atoms are have a large difference (more than 1.8) in electronegativity. This means that 1 atom would completely remove an electron from the other. E.g LiCl.

Metallic bonding occurs if...
We have only metal atoms present.

If we look more closely at covalent compounds we can further separate them into 2 types:
Task 4j: Create an infographic on the types of bonding and the properties associated with each one.
Examples of infographic websites: popplet, easel.ly, canva


Extension: Explain why are the electronegativity values of the noble gases usually ignored?

Intermolecular forces (of attraction) are weak forces that occur between molecules. There are 3 types:
Helpful LINK 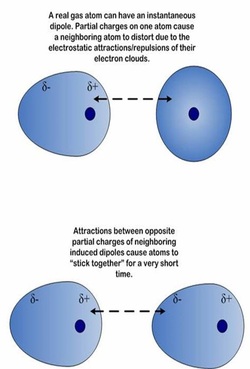 Examples:
1. A substance with strong intermolecular forces will have a higher melting and boiling point as the molecules will require more energy to overcome the IMF´s when becoming a liquid or a gas.

Technology is constantly limited by the tools and materials that we have at our disposal. Recent discoveries and advancements in the field of nanotechnology have led to the challenge of finding new uses and applications for them.
﻿"Nanotechnology is science, engineering, and technology conducted at the nanoscale, which is about 1 to 100 nanometers." (Nano.gov, 2015)
The properties of materials on the nano-scale can be very different to those found on the macro-scale. This opens up a whole new area of research called nanotechnology which could be extremely important in many areas of scientific development.

Innovation in the uses of nanomaterials has already lead to discoveries of materials such as graphene - one of the lightest and strongest materials that we know.
Although there are many advantages of the developments in nanotechnology, there are also many concerns such as:
Do you think the benefits outweigh the limitations?
References

​Jha, A. (2013). What is Heisenberg's Uncertainty Principle?. the Guardian. Retrieved 27 September 2015, from http://www.theguardian.com/science/2013/nov/10/what-is-heisenbergs-uncertainty-principle