From Cells to Organisms

Concept of a cell

The cell is the basic structural, functional and biological unit of all living things. For this reason, it is considered the smallest collection of matter that can be classed as alive; a cell is the smallest form of life.

There are two types of cells, characterized by the presence of or absence of a nucleus, and by its internal organisation:

Prokaryotic cells are simple cells that do not have a true nucleus. They have simple organelles, but lack membranous organelles, and they have a cell wall.

Eukaryotic cells are those which do have a true nucleus. They are larger than prokaryotes, do not always have a cell wall, and have organelles which perform specialised functions.

Task 1a: complete the following tasks in your Natural Sciences Document (NSD),

a) Insert a table and use it to compare and contrast prokaryotic and eukaryotic cells.

b) Explain why a cell from our body cannot live separately from the rest and yet the single cell of a protozoan can survive on its own.

There are two types of eukaryotic cells, plant and animal. In this unit we are going to study animal cells, as we will later talk about human tissues, organs and systems, which are indeed made of animal cells.

Structure of the eukaryotic animal cell 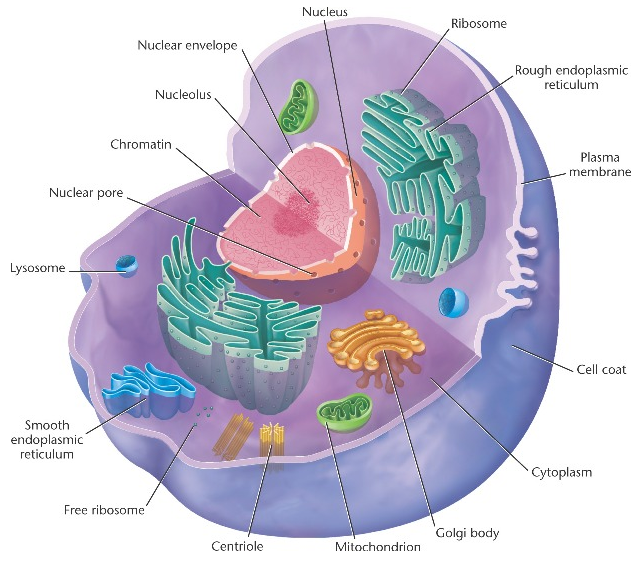 (Animal Cells, 2015)
Cell or plasma membrane: Formed by a phospholipid bilayer that surrounds the cytoplasm. It functions as a selective barrier which separates the cell’s contents from its surroundings. It controls the exchange of materials such as nutrients and waste products.

Cytoplasm: The cytoplasm is the cellular content excluding the nucleus. It is formed by an aqueous solution with organelles embedded in it.

Mitochondrion: The mitochondrion is an elongated-shaped organelle enclosed in an envelope of two membranes. It is the site for cellular respiration, the process by which the cell obtains energy (ATP- Adenosine triphosphate).

Ribosomes: Ribosomes are tiny organelles found free in the cytoplasm or attached to the membranes of the endoplasmic reticulum. Ribosomes are made of RNA (ribonucleic acid) and proteins, and are the site of protein synthesis.

Golgi apparatus: A series of flattened stacks of membrane-bound sacs (disclike compartments called cisternae), surrounded by small vesicles. In these vesicles, lipids and proteins synthesized in the ER are chemically changed and prepared for secretion (export to the outside of the cell).

Lysosomes: These are membrane-bound vesicles that contain digestive enzymes. They carry out the digestion of large molecules or old organelles.

Cytoskeleton: System of protein filaments that form complex networks in the cytoplasm of the cell. It gives a cell its shape and is very important in cell division (or mitosis).

Centrioles: Centrioles are small hollow cylinders made up of bundles of microtubules. They direct the movements of the cytoskeleton and are involved in cell division (or mitosis).

Nucleus: The nucleus, which is usually spherical, is found in the centre of the cell. It contains the genetic material (DNA) with the information to control all cellular processes.


We will look at the nucleus with its different structures and chromosomes in detail in unit 5.

Task 1b: In your NSD, complete the following tasks:

a) Draw a cell and label its organelles using Google Draw or similar.
b) Draw a nucleus and label its parts.
c) Start a glossary in Google sheets or similar and define the following concepts: lysosome, cytoskeleton and mitochondria.

Copy your diagrams by highlighting them in Google draw and using the shortcut Ctrl+C. Paste them into your NSD by using Ctrl+V.


You will be extending your glossary throughout this year, so give it an appropriate title and place in the same folder as your NSD. You can copy and paste the relevant sections into your NSD using the above shortcuts.

Extension: How many chromosomes do humans have?

In unicellular organisms, such as paramecium, an individual cell needs to carry out all the life processes. However, in multicellular organisms, cells become specialised and work together, unable to survive on their own. Humans are multicellular organism composed of eukaryotic cells. Even though the size and shape of our cells vary according to function, we could say that they all share the same basic structures, having three main parts: the cell membrane, the cytoplasm and the nucleus.

The cells of multicellular organisms are differentiated, specialised and contain different organelles. They are grouped together to form more complex structures. This happens the following way:

Cells that perform the same function can work together and form tissues. A tissue is a group of similar cells that together, carry out a specific function. There are different tissues in our bodies which perform specific functions; for example, epithelial tissue covers the outside of the body, and muscle tissue is the main component of muscles and it is responsible for movement.

To perform different functions, different tissues can work together and make organs. An organ is formed by the functional grouping of several tissues to perform a new function. The brain, heart, stomach and liver are examples of important organs in our body.

In the same way, different organs work together to make systems. A system is a collective functional unit made of several organs which work in complete coordination with one another to perform a complex function. The digestive, the circulatory and the respiratory systems are some examples of the systems that make up our bodies.

Multicellular organisms are made of many different organs and systems that are coordinated.

Work your way through the following Prezi to revise cellular structure.
Mechanisms of transport across the plasma membrane

In the previous section we saw that the content of the cell is surrounded by a partially permeable membrane called the plasma membrane. This barrier is essential for transporting and regulating the materials that go in and out of the cell. As already mentioned, this plasma membrane has selective permeability; that is, it allows some substances to cross it more easily than others.

Molecules (including ions) in a liquid or gas are constantly moving and tend to spread out into the available space. If we place a membrane separating pure water from a solution of dissolved dye in water, and assuming the membrane is permeable to the dye molecules, the dye molecules will move randomly. However, they will tend to diffuse to the side where there is just pure water until they are evenly spaced and reach equilibrium.

In a cell, when diffusion takes place, we talk about passive transport, as the cell does not have to spend energy for diffusion to occur. 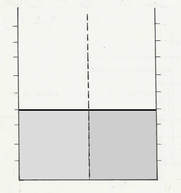 Task 1c Questions on Diffusion and Osmosis
1. Mr Collins has got some new aftershave. Danny can smell it as soon as Mr Collins comes into the lab. Ramesh does not smell it until two minutes later.
a       Who is sitting nearest to the lab door?
b       Explain your answer

2. Diffusion happens faster in gases than in liquids. Why does this happen?

3. Why is it important that a cell membrane does not allow all dissolved substances to diffuse freely through it?

4.  The concentration of the tissue fluid, which bathes all cells in the body, is kept more or less constant. Why is this important?

5.  Draw a diagram that shows a vessel which contains a concentrated and a dilute solution, at the same level, separated by a partially permeable membrane. Draw a similar diagram to show the liquid levels after an hour or two.

7. When meat is salted, bacteria cannot grow on it. Suggest a reason for this.
Active transport is a method by which particles are moved against a concentration gradient.
This movement requires energy (ATP) and involves protein carriers in the plasma membrane. 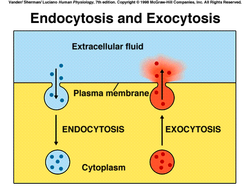 Some particles are too big to cross a membrane by diffusion or by active transport. In these cases, an infolding or extension of the cell membrane will engulf the molecule and form a vesicle to transport it.

Endocytosis and exocytosis are active processes involving the bulk transport of materials through membranes.


This can be either into the cell, endocytosis, or out of the cell, exocytosis.

a) In your glossary, define: concentration gradient; passive transport; and active transport.

b) In your NSD, explain osmosis with an example and then use this to write a clear definition of osmosis in your glossary.

Extension: Suggest why the above processes are important in  human biology.

Work through the following Prezi to revise the content from this chapter.
References

malouffbioblog,. (2011). Diffusion and Osmosis- Coming to a Lab Near You!. Retrieved 9 July 2015, from https://malouffbioblog.wordpress.com/2011/11/29/diffusion-and-osmosis-coming-to-a-lab-near-you